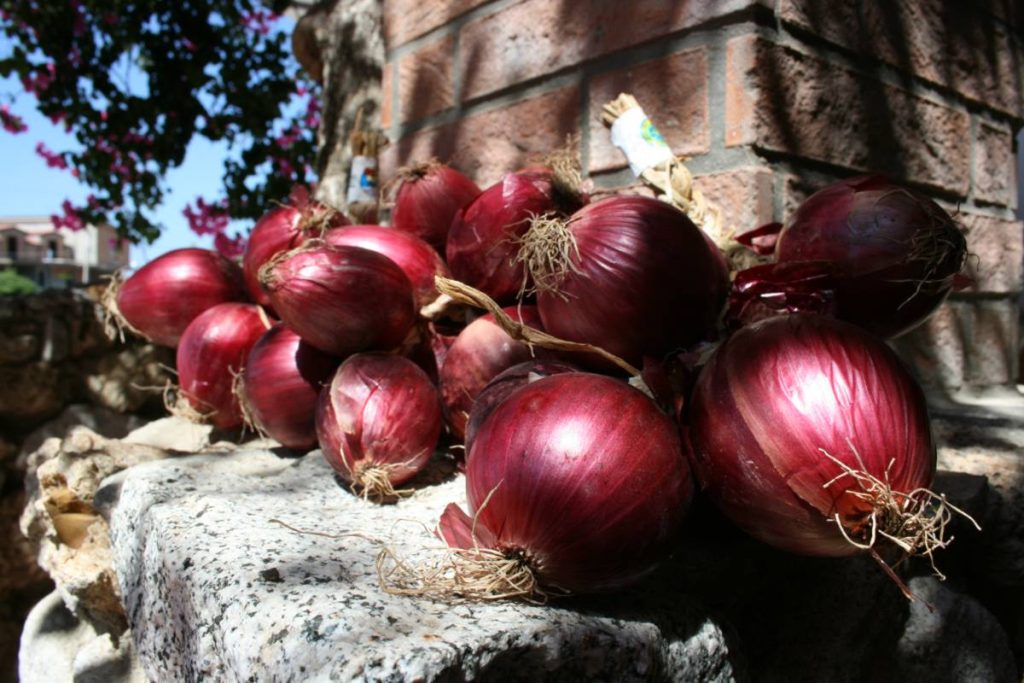 Thanks to its fleshiness, sweet flavour and crunchy character, the ‘red onion from Tropea‘ is still one of the most popular and sought-after products. Everyone agrees that the ‘Tropea onion’ has exceptional therapeutic properties, as confirmed by scrupulous laboratory analyses.

There is no doubt, therefore, that the “red onion of Tropea” is today one of the most interesting typical local products of the entire Italian agricultural scene. Every year, in the month of August, takes place in Ricadi, the festival of the red onion.On the initiative of the municipal administration, in agreement with the pro-loco and an organizing committee, which always renews and integrates in the continuous search for the best to offer to an increasing number of visitors and tourists, who willingly leave the village or the hotel, where they spend their holidays, to participate in the event of the Festival, aimed at enhancing the component typically rural area of Tropea-Capo Vaticano.

The festival also wants to recover the ancient values of the peasant world, love for the land and animals, interest in the crops, the rediscovery of the kitchen and genuine and traditional foods. It deserves the red of Tropea, the attribution of the QUALITY MARK to avoid confusion and possible counterfeits and to promote, support the improvement and increase the productive development.
Italian researchers have ascertained that the onion relieves, if not cures perfectly, colds and flu. It also helps fight aging. This vegetable, which contains vitamin C, has an anti-hemorrhagic effect, strengthens cells, invigorates veins and arteries and helps defend against infectious attacks.

It should also be noted that the onion does not lack iron, which keeps the number of red blood cells in the blood at the right level; it has a sedative power so that it easily reconciles sleep and also exerts its beneficial action on diuresis and hypertension. Recent studies on senility and cancer prevention show the importance in the daily diet of vitamin E, selenium, iodine, zinc and magnesium, elements present in a certain quantity in onions. Scholars such as Kendal, Menom, Newal recommend them for the treatment of chronic rheumatism, they consider them beneficial in the treatment of obesity, they have been positively tested as stimulants of virility, they find an antisclerotic power with benefits for the heart and arteries. Therefore, in the fight against cardiovascular diseases and heart attacks, eating these onions means ensuring an increase in the fibrinolytic activity of the blood. It is no coincidence to find the low mortality rate for heart attacks in Calabria, where people consume a lot of onions, preparing them in salads, in dressings, cooking them in the oven, boiled, omelettes and especially raw. We can rightly define the onion as a delicious vegetable very important in the diet of every day for its therapeutic components.